The 13th “Hakuho Japanese Research Fellowship” Final Research Report Meeting was held on Friday, August 23, 2019.
On the day of the event, a light rain started to fall in the morning, but more than 50 people including research fellows (long-term, and short-term second-round), faculty members of receiving organizations, evaluation committee members, managers from receiving organizations, and representatives from Hakuho Foundation came to the venue in Shinagawa, Tokyo to participate in the research report and question-and-answer sessions. Research fellows from various countries shared the results of their six-month or one-year stays in Japan, and found a valuable opportunity to consider the future development of Japanese research. 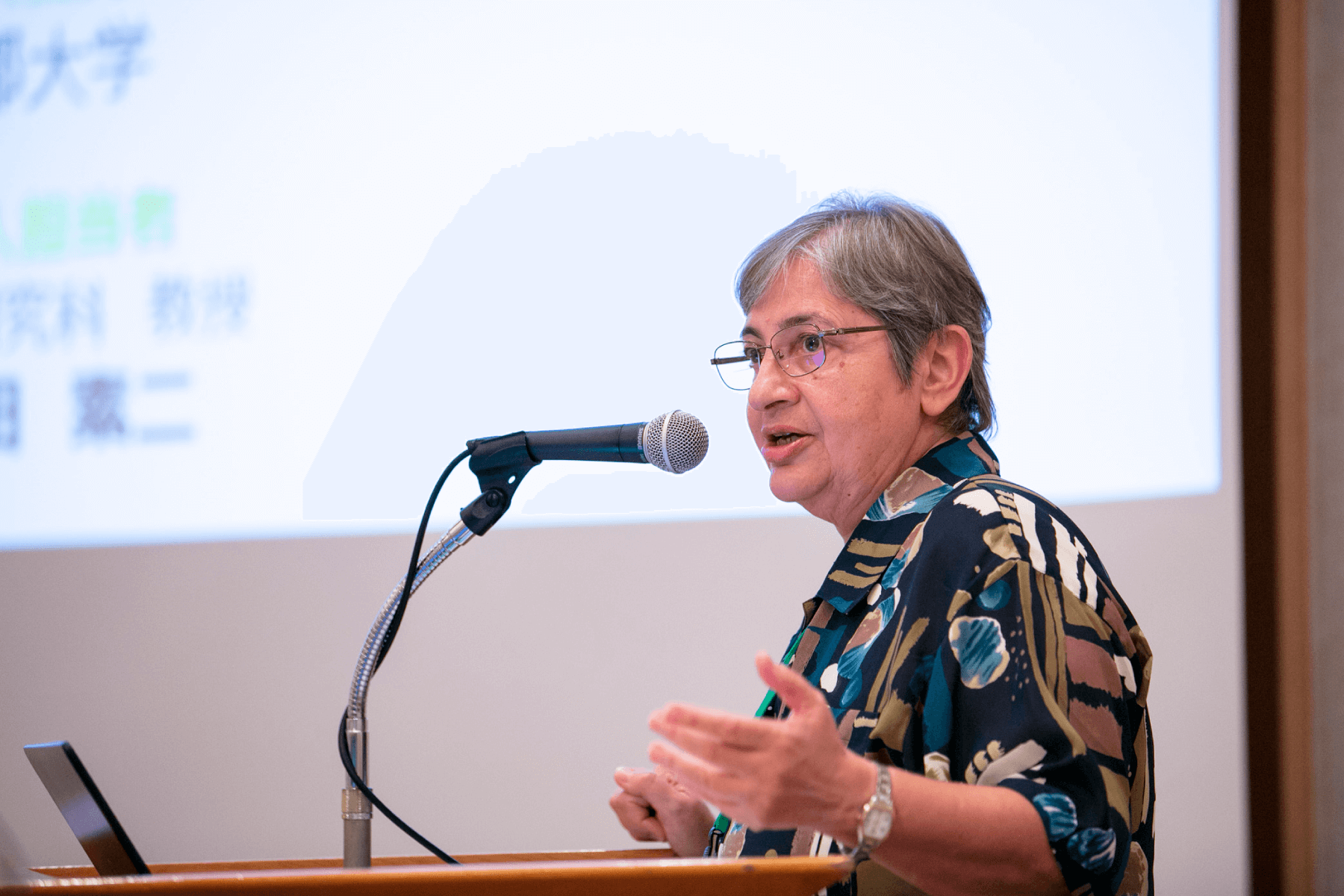 Researchers in the field of “Japanese language and Japanese language education” reported research results that will lead to more practical Japanese language education in their home countries based on their interviews with international students and workers from their respective countries who are living in Japan. Researchers in the field of “Japanese literature and Japanese culture” made presentations on the status of their investigation into research materials they were able to find because they were staying in Japan, and studies based on information obtained through fieldwork in various parts of Japan. Many of the research reports delved deeper into and expanded upon the content of interim reports made in February 2019, showing that each research fellow had engaged in fruitful research activities.

Each research report was 15 minutes long, followed by a five-minute comment segment for the faculty from receiving organizations, and a five-minute question-and-answer segment. In the question-and-answer segment, research fellows received questions on their research reports and criticism regarding issues in their reports, as well as advice that served to expand the perspective of their future research, so a lively a discussion was held in the limited time available. 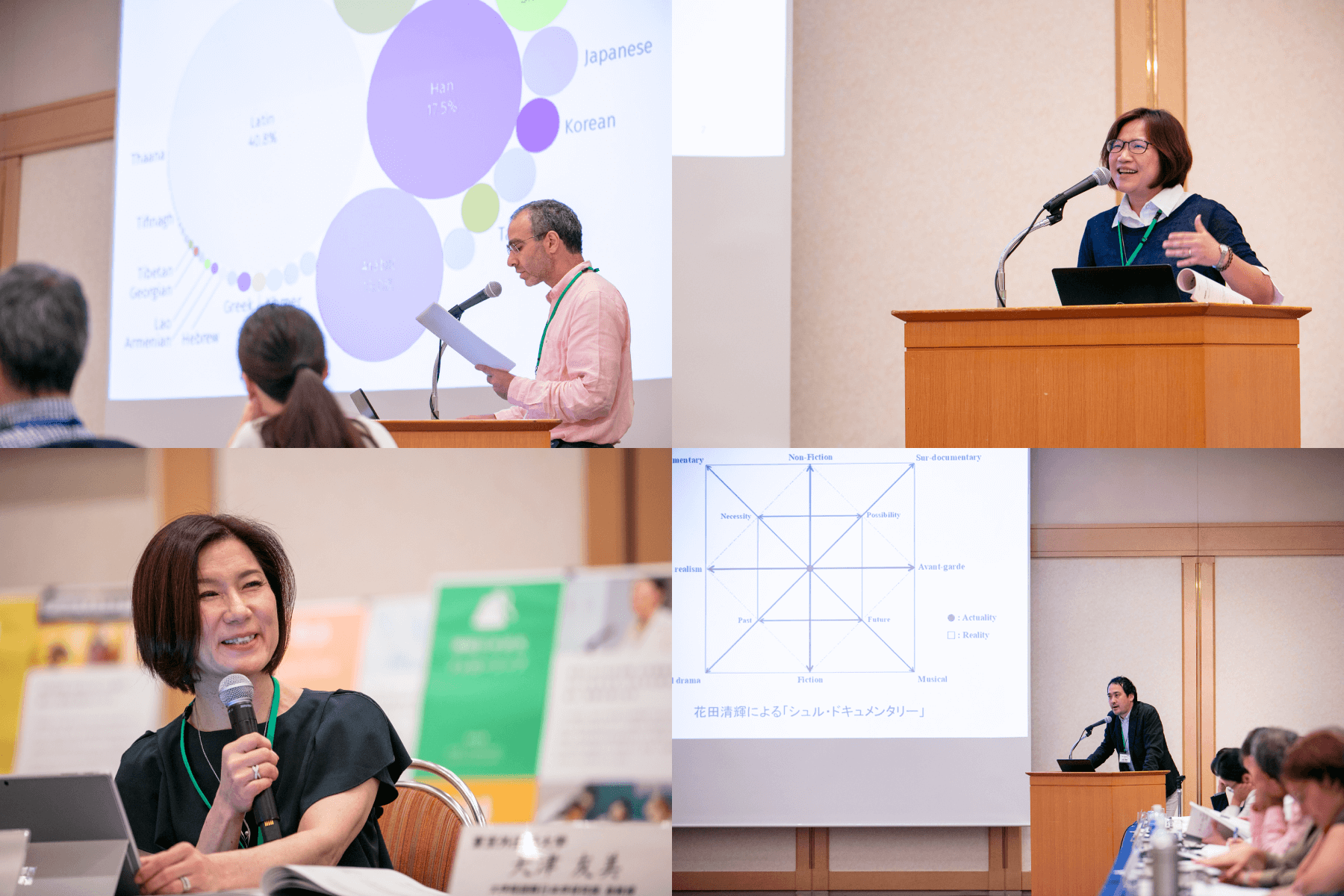 (Listed below with professional titles omitted, in order of report presentation)

“Printing at the Margins: The Textual Network of Medieval Japan”

Professor, Institute for the Study of Societies and Knowledge, Bulgarian Academy of Sciences

“Japanese Experience of Small Historical Town’s Revitalization: The Perspectives for Applying in Ukraine“ 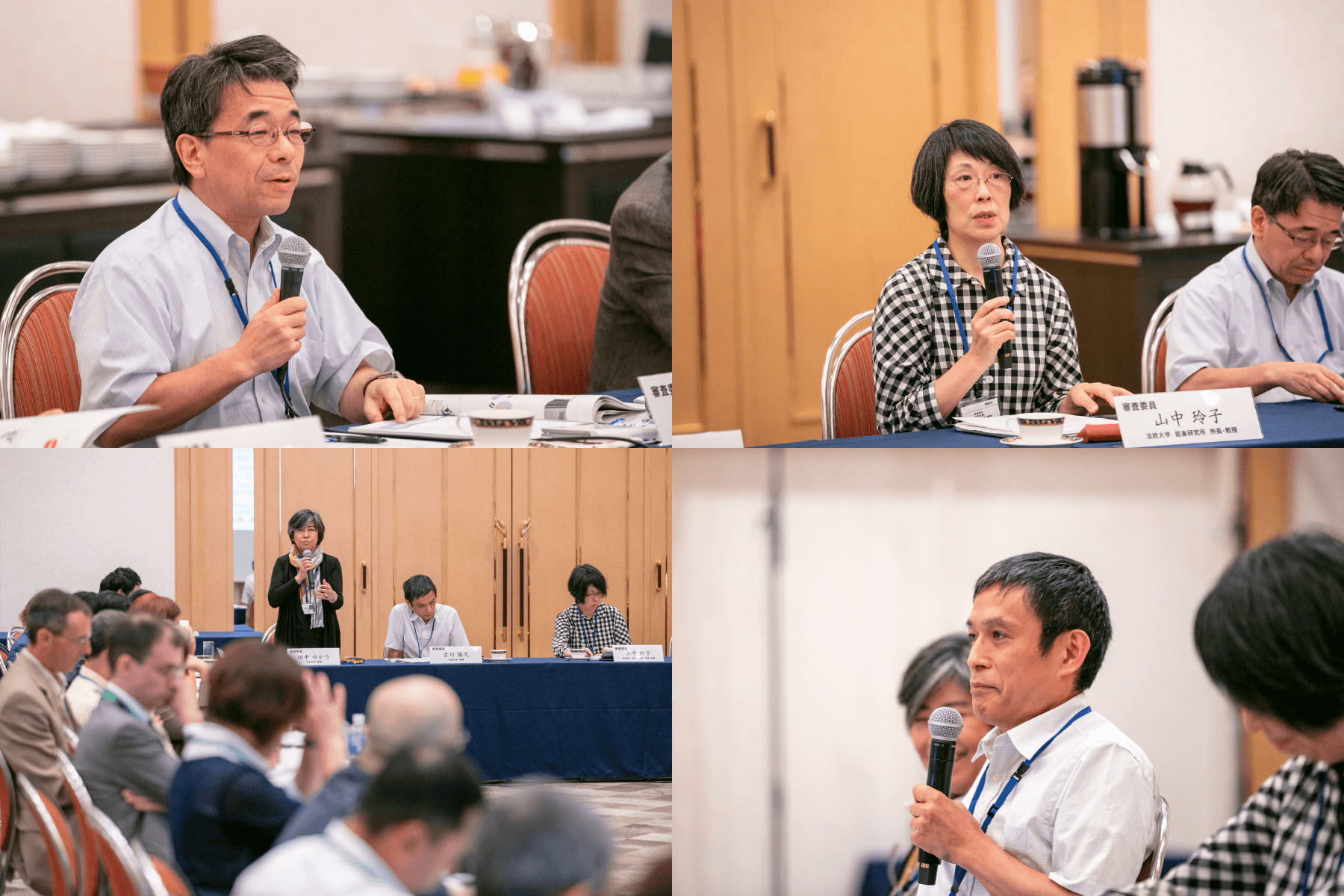 Comments by the Evaluation Committee

After all 15 researchers completed their reports, they were evaluated by the four members of the Evaluation Committee.

First, Mr. Masaru Inoue, Chair of the Evaluation Committee, expressed his appreciation for the researchers, and continued with the following comments. “Overall, I got the impression that every researcher was able to research a great many things during their stay. I hope you can all apply this to your future work. I am also grateful for the many examples of researchers who made use of the critique of the interim reports in February to further their research. You have engaged in exchanges with researchers in Japan during your fellowships, and I expect that these exchanges will continue in the future. In addition, I encourage you to conduct exchanges with researchers in the same fields in your home countries who do not speak Japanese. I also encourage you to work in your home countries to improve the status of the Japanese language, Japanese culture, and Japanese research.”

Next, the other Evaluation Committee members offered their comments.

“I enjoyed today’s presentations very much. My specialty is Japanese culture and Japanese literature, so I am unfamiliar with many aspects of Japanese language research. This time there was a report about specific Japanese language textbooks, which I found very interesting. I was also impressed by the fact the fellows engaged in deeper and broader research than in their interim reports. I encourage you to make use of these results and continue to play an active role in the future.” (Reiko Nakayama, Evaluation Committee Member)

“Three or four of the researchers who reported today made very different reports from what they had planned, and I think that came as a result of doing research in Japan. Actually encountering the subject of your Japanese research to stimulate your thoughts is something you can only do by coming to Japan. I’m glad that researchers came and did this.” (Takahisa Furukawa, Evaluation Committee Member)

“I found that everyone made full use of their time, for six months or one year in Japan. Four out of the fifteen fellows this time were researching Japanese language or Japanese language education. Two of those four based their research on the new trend in Japanese language education to use case teaching materials, and I think that this research will help fulfill the purpose of this fellowship. In addition, there was a topic on the ‘internationalization of Japanese research’ in the research reports on Japanese culture. I hope that we can hold deeper discussions about this point in the future.” (Yukari Tanaka, Evaluation Committee Member) 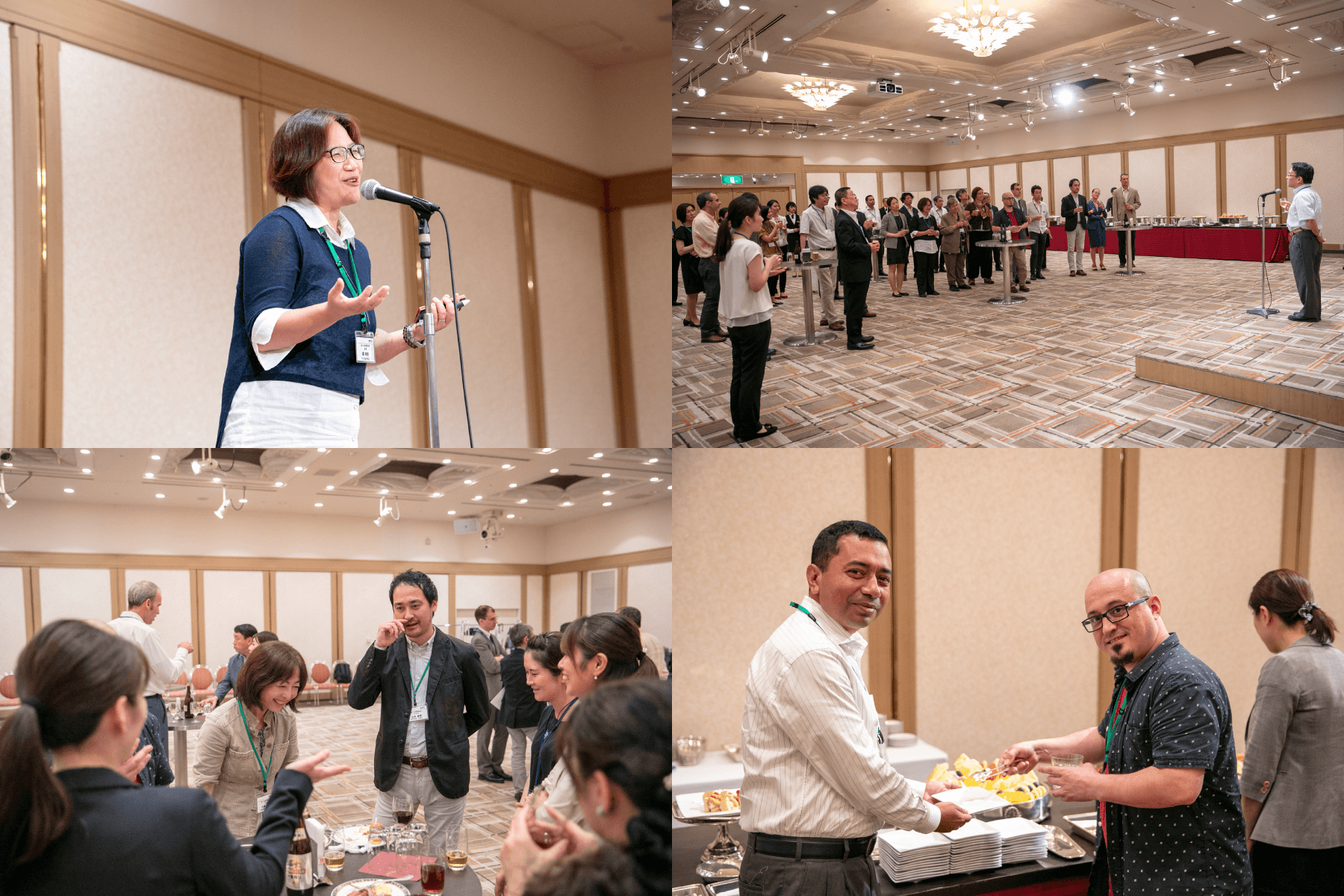 After all 15 researchers finished their reports, the participants moved to another venue for a research recognition and exchange party. The event started with a toast by Mr. Inoue, the Evaluation Committee Chairman. The research fellows then enjoyed buffet-style food and drinks, while interacting and exchanging information with the evaluation committee members and faculty from their receiving organizations, as well as with their fellow researchers. Finally, on behalf of the 13th Fellowship researchers, Professor Hsiao Chin Lo delivered greetings, bringing the event to a close in a friendly atmosphere.

Here we introduce reflections from the researchers who ended their fellowships spanning either six months or one year.

“I specialize in Japanese cultural history, so I have visited Kyoto many times. However, I had never lived in Kyoto before, and it was a great experience to live and study in Kyoto for half a year. Kyoto is a former capital of Japan, and there are many places where I could directly connect with Japan’s history. Kyoto is a truly special place for researchers, and I found it to be a very valuable experience to stay there for my six-month fellowship.” (Professor Brecher)

“I went to various places during my year in Japan, and was very busy interviewing residents and observing local festivals. In the town of Matsugasaki in Kyoto Prefecture, they lit ceremonial bonfires on the 16th of August, and they prepared firewood for this on the 15th. This year, Typhoon No. 10 landed on that day, so there was great concern about whether or not they would be able to light the ceremonial bonfires and hold the festival. But the storm passed on the 16th, the ceremonial bonfires were lit, and all sorts of people including old residents, newcomers, and outsiders alike joined together for the sashi-odori dance. I found this to be a wonderful experience in which old residents and new residents come together to build a community culture.” (Professor Keliyan)

“In terms of research, I learned about the current state of work and life among Taiwanese university graduates in Japan by interacting with them, which helped to advance my research. Aside from my research, I also worked on obtaining case teaching method and Kids Japanese Language Teachers certification, and renewed my certification as an OPI Japanese Language Test proctor. Now I am working to obtain Japanese childcare certification. I was able to go beyond my research and study these other topics because I did this fellowship in Japan, so I am very grateful to the Hakuho Foundation. I would like to use what I gained this year for teacher training in Taiwan, and I would like to spread the word about the Hakuho Foundation at academic conferences in Taiwan as well.” (Professor Lo)

“This was my first time living in Kyoto, where I did my fellowship for one year. As a researcher of medieval Japanese culture, I felt that research and everyday life overlap when living in Kyoto. For example, I was reading one of the “mirrors” (Japanese historical tales) when I realized I was in the place described in the story, so I could go and see the Buddhist temples and Shinto shrines that appear in the story. It left a deep impression on me, because I could actually go and see for myself something that I had only read about in books before. Apart from research, I participated in the Tenjin Festival in Osaka with my friends, and found it to be a lot of fun.” (Professor Brightwell)

“The greatest thing I got from this fellowship was the chance I had to study materials that I could not have found had I not come to Japan, which became several years’ worth of research topics for me as a researcher. I went to Nagasaki seven or eight times in the past year, and visited Tokyo several times as well. There were many hurdles on the way to finding precious materials hidden in Japan, as I had to call the owners of the materials, or write letters, negotiate introductions to important figures in the community, and so on. In the course of this research, I encountered many Japanese people who were very kind to me. My next challenge is to figure out how I will compile the results of my research during this fellowship.” (Professor Tang)

“I’ve been far busier than I had imagined I would be in the past year, but I obtained many important findings as a result of my efforts. In terms of research, I was able to focus on writing, including papers about pronunciation among beginner students of the Japanese language. In terms of education, I collected new Japanese language teaching materials and ideas for studying Japanese. After returning to China in September, I will be in charge of Japanese language classes for freshman university students, and I hope to utilize the results of this research fellowship in these classes. The students know that I have stayed in Japan for a year, and they are looking forward to hearing new stories, such as the preparations for the 2020 Tokyo Olympics.” (Professor Liu)

“I think my research would not have been possible without this fellowship. Sometimes it took several weeks to read one document, such as the Daikyoki (Record of Imperial Court Banquets), because I needed a letter of introduction from the library of Waseda University in order to read it at the library of Keio University. In the past year, I have focused on browsing through as many documents as possible to find examples of saji traditional spoons in use. When I return to my country, I will teach the Japanese language to students, while making use of the tremendous materials I managed to accumulate during this fellowship to write papers.” (Professor Do) 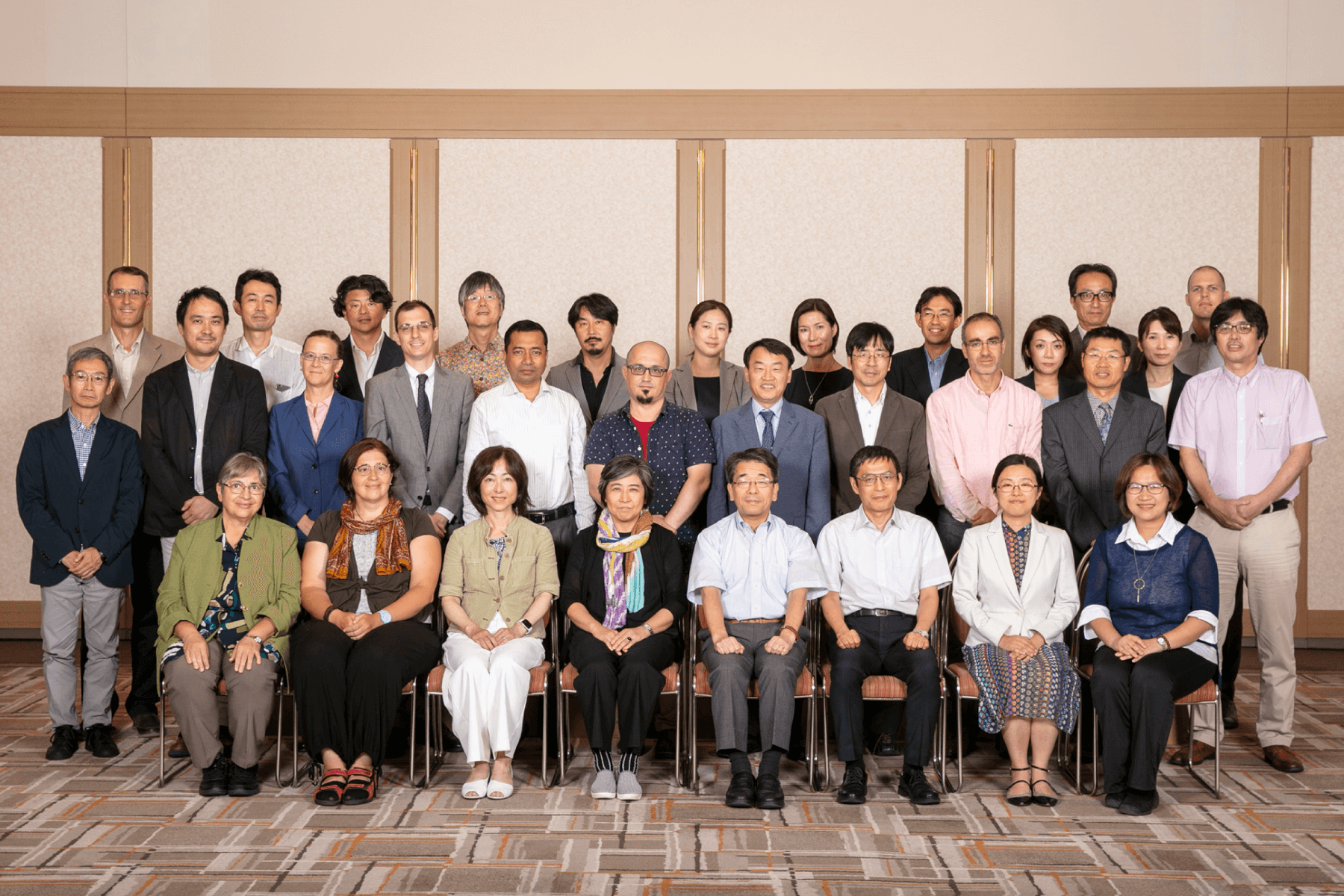